Syria war: What we know about Douma ‘chemical attack’

Syrian opposition activists, rescue workers and medics say more than 40 people were killed on 7 April in a suspected chemical attack on Douma, which was the last rebel-held town in the Eastern Ghouta region.

The Organisation for the Prohibition of Chemical Weapons (OPCW) says initial tests on samples from two sites detected “various chlorinated organic chemicals”, along with explosive residues. However, no nerve agents were detected.

The Syrian government denies ever using chemical weapons, and its ally Russia says it has evidence that the incident was staged with the help of the UK.

Why was Douma being bombed?

In February, forces loyal to President Bashar al-Assad launched an assault on the Eastern Ghouta that reportedly left more than 1,700 civilians dead.

In March, troops split the region into three pockets – the largest of which was around Douma, home to between 80,000 and 150,000 people. Facing defeat, rebel groups in the other two pockets agreed to be evacuated to northern Syria.

But the group controlling Douma, Jaysh al-Islam, continued to hold out. On 6 April, after negotiations with the government stalled, air strikes resumed.

What happened on 7 April?

The bombardment continued for a second day, with dozens of people reportedly killed or injured by conventional munitions before the suspected chemical attack.

The first occurred at approximately 16:00 (13:00 GMT) and saw the Saada bakery on Omar Ibn Al-Khattab street in north-western Douma targeted, the VDC said.

It cited a member of the Syria Civil Defence, whose rescue workers are widely known as the White Helmets, as saying he smelt chlorine in the air after the strike, but that he could not determine its source.

The VDC said the second incident took place not far to the east, near Martyrs’ Square, at approximately 19:30.

At 19:45, more than 500 patients – most of them women and children – were brought to medical facilities with symptoms indicative of exposure to a chemical agent, according to the Syria Civil Defence and the Syrian American Medical Society (SAMS), which supports hospitals in rebel-held areas.

The patients showed signs of “respiratory distress, central cyanosis [blue skin or lips], excessive oral foaming, corneal burns, and the emission of chlorine-like odour”, a joint statement issued on Sunday said. One woman who died had convulsions and pinpoint pupils.

The Union of Medical Care and Relief Organizations (UOSSM), which supports hospitals in rebel-held Syria, also said it received reports of two incidents.

People were treated for breathing difficulties and irritation of the eyes following the first, the UOSSM said. After the second, patients were brought to hospital smelling strongly of a chlorine-like substance and presenting symptoms that included cyanosis, foaming of the mouth, and cornea irritation, it added.

A medical student working at a hospital told the BBC he had treated a man who died. “His pupils were dilated and he had foam in his mouth. His heart was very slow. Then he coughed blood into his mouth as well,” he said.

Two videos circulated by the opposition activist group Douma Revolution showed what it said were the bodies of children, women and men found in one block of flats, which is believed to be located south-west of Martyrs’ Square. Some had foam coming out of their mouths and noses. 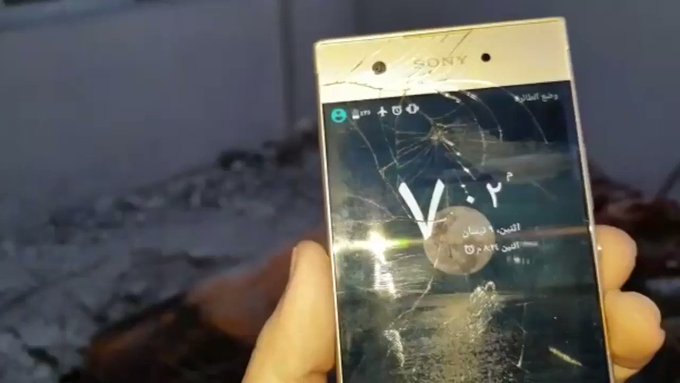 Activists also posted a video which they said showed a yellow industrial gas cylinder on the balcony of the same block of flats. One end of the cylinder was lying in a crater-like opening in the reinforced concrete floor.

A second gas cylinder was filmed on the bed of a top-floor flat to the south-west, below a crater-like opening in the concrete roof.

How many people died?

The World Health Organization said on 11 April that it had received reports from its local “health cluster partners” of 43 deaths related to symptoms consistent with exposure to highly toxic chemicals”.

The Syria Civil Defence and SAMS said rescue workers found 42 people dead in their homes. One person was declared dead on arrival at a hospital, and another six died while receiving treatment, they added. An earlier, now deleted tweet by the Syria Civil Defence put the number dead at more than 150.

The UOSSM initially reported that 70 people were confirmed dead. On 9 April, it revised down the figure to at least 42.

The Syrian Observatory for Human Rights, a UK-based monitoring group, said air strikes on 6 and 7 April killed almost 100 people. It said they included 21 who died as a result of suffocation, but that it was unable to identify the cause.

The British investigative journalism website, Bellingcat, said it had counted at least 34 bodies in the two videos circulated by Douma Revolution.

Bellingcat also assessed that the block of flats near Martyrs’ Square where the bodies were filmed was visited by Russian military personnel on 9 April.

What could they have been exposed to?

The Syria Civil Defence and SAMS said the day after the incident that they believed those who died suffocated as a result of exposure to toxic chemicals, most likely an organophosphate – a compound grouping associated with pesticides and nerve agents, such as Sarin. The UOSSM also concluded that the symptoms of the casualties were consistent with exposure to a nerve agent, possibly one mixed with chlorine.

On 13 April, the US said it assessed “with confidence that the Syrian regime used chemical weapons”.

The conclusion was “based on descriptions of the attack in multiple media sources, the reported symptoms experienced by victims, videos and images showing two assessed barrel bombs from the attack, and reliable information indicating co-ordination between Syrian military officials before the attack”.

The OPCW, which oversees the Chemical Weapons Convention, dispatched experts from its Fact-Finding Mission (FFM) to Damascus five days after the attack. But they were unable to visit any of the sites of interest until 21 April because of an attack on a UN security team conducting a reconnaissance mission.

The team also gathered or received samples and interviewed witnesses, including alleged casualties, in a neighbouring country.

On 6 July, a preliminary report issued by the OPCW said “no organophosphorus nerve agents or their degradation products were detected, either in the environmental samples or in plasma samples from the alleged casualties”. However, it added, “various chlorinated organic chemicals were found in samples from Locations 2 and 4, along with residues of explosive”.

The OPCW said the FFM team was now working to establish the significance of the results. It is also assessing the association of the two gas cylinders with the incident, the relative damage to the cylinders and the roofs, and how the cylinders arrived at their respective locations.

The chlorinated compounds included those used to treat drinking water, as a disinfectant, a wood preservative, or a flame retardant. However, the same compounds were detected at other sites in Syria where the OPCW has concluded that chlorine was likely used as a weapon, including Saraqeb and Latamina.

What does the Syrian government say?

President Assad has accused the US, UK and France of “staging” the incident in Douma with the help of the Syria Civil Defence, which receives funding from Western governments.

“It was a lie. After we liberated that area our information confirmed the attack did not take place,” he told the Daily Mail on 9 June. “The British government should prove with evidence that the attack happened, and then they should prove who is responsible. This did not happen.”

Russian permanent representative to the UN Vassily Nebenzia told the Security Council on 9 April that Russian military specialists had visited Douma and taken soil samples that showed no presence of nerve agents or substances containing chlorine. He also said no-one with symptoms of exposure to sarin or chlorine had been admitted to Douma’s hospital, nor any bodies found.

Four days later, Foreign Minister Sergei Lavrov said Russia had “irrefutable evidence that this was yet another attack, staged with the participation of special services of one state that is striving to be at the forefront of the Russophobic campaign”.

A British diplomat called the allegation “bizarre” and a “blatant lie”.

On 26 April, Russian and Syrian diplomats presented to a briefing at the OPCW’s headquarters in The Hague more than a dozen people from Douma who said they had not seen any evidence of chemical weapons being used there. They included Hasan Diab, an 11-year-old boy who was seen being doused in water in a video widely circulated online after the alleged attack.

Western nations dismissed the event as “nothing more than a crude propaganda exercise” and an “obscene masquerade”.

The US said it had no information to suggest Jaysh al-Islam had ever used chemical weapons, and that it was unlikely that the opposition could have fabricated the number of reports that came from Douma on 7 April and “deceived multiple media outlets while evading our detection”.

How has the international community reacted?

United Nations Secretary General António Guterres said he was outraged by the reports from Douma and warned that “any confirmed use of chemical weapons, by any party to the conflict and under any circumstances, is abhorrent and a clear violation of international law”.

Hours before the OPCW Fact-Finding Mission team arrived in Damascus on 14 April, the US, UK and France carried out missile strikes on three sites they said were “specifically associated with the Syrian regime’s chemical weapons programme”.

The US military said warships and jets launched 105 missiles that hit a branch of the Scientific Studies and Research Centre (SSRC) in the capital’s Barzeh district, the Him Shinshar chemical weapons storage facility west of the city of Homs, and a nearby chemical weapons bunker.

US President Donald Trump said he wanted “to establish a strong deterrent against the production, spread, and use of chemical weapons”.

When were chemical weapons used before?

In August 2013, rockets containing Sarin were fired at several opposition-held suburbs in the Eastern and Western Ghouta, killing hundreds of people. UN experts confirmed that Sarin was used in the attack, but they were not asked to ascribe any blame.

Western powers said only Syrian government forces could have carried out the attack. President Assad denied the allegation, but he did agree to sign the Chemical Weapons Convention and destroy Syria’s declared chemical arsenal.

Experts from a joint UN-OPCW mission also said they were confident that government forces used Sarin in an attack in April 2017 on the rebel-held Khan Sheikhoun, which reportedly killed more than 80 people.

President Assad dismissed the attack as a fabrication, but the US carried a cruise missile strike on a Syrian airbase in retaliation.

The UN-OPCW mission also found that government forces used chlorine as a weapon on at least three occasions during the civil war.

In our town of Ein Tarma, death awakened us, coming with the air we breathe, with a breeze we inhale, a poison-filled air. We opened our eyes on a loud noise in the streets, and a call from the mosques asking for help...